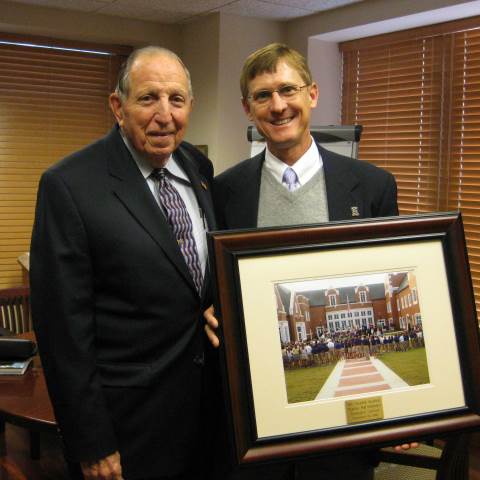 It is with sadness that we share with you news of the passing of John Thatcher, Class of 1944, Life Trustee, and 1990 Distinguished Alumnus.

John Thatcher was a remarkable man, beloved by all who knew him and remarkably faithful to his alma mater throughout the course of his life. John came to Darlington as a boarding student from Florida, and among his many activities he played baseball, was a member of the band, and worked on the school newspaper. After Darlington, Mr. Thatcher attended Davidson College and graduated with a B.S. in Economics/Business. After college, he became a self-proclaimed “banana peddler,” taking over Banana Supply Holding Co. after his father’s health began to decline. The highly successful company imported bananas and other tropical products from Central and South America, distributing them to wholesale customers throughout Florida. When he later sold the company to Chiquita it was one of their major acquisitions.

Mr. Thatcher’s service to Darlington is extraordinary and is felt by our students and faculty on a daily basis. In 1992, Mr. Thatcher endowed Darlington’s first faculty chair, The Thatcher Chair of English, which is held currently by John Cox. His generous support of the growth of Darlington’s entire faculty is felt yearly in the awarding of grants from the Thatcher Master Teacher Fund and the Thatcher Faculty Development and Research Fund. And then, of course, our Pre-K to 8 students live daily in the Samuel E. and Mary W. Thatcher Hall, named in honor of Mr. Thatcher’s parents, a world-class learning environment where students are empowered to be their best on a daily basis.

John Thatcher’s remarkable legacy will serve Darlington and those who knew him far beyond his years on earth. His generosity can only be repaid by each of us giving our best every day.  John Thatcher saw the greatest of successes, while carrying himself with a humility and grace that is a model for us all.

On a personal note, my family and I are at Darlington, in part, because of a video of John Thatcher addressing the Board of Trustees during his term as chairman in the 1990s. I encourage each of you to take a few minutes to get to know John Thatcher by watching it and reading about him in the 2012 Darlington Magazine, both linked below.