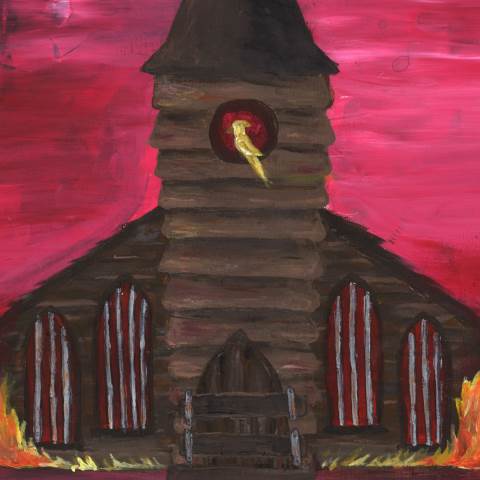 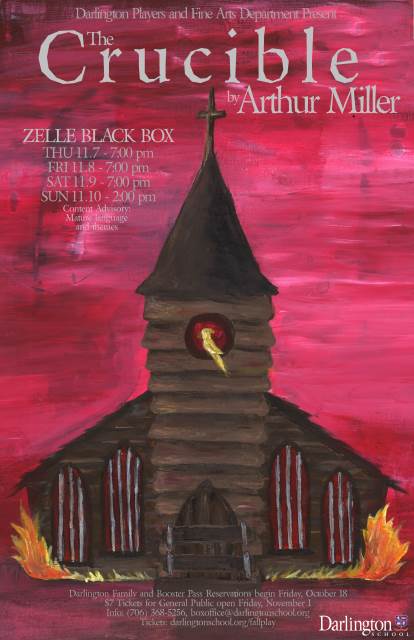 Darlington’s fine arts department and The Darlington Players will present Arthur Miller’s “The Crucible” in the Zelle Black Box Theatre, Nov. 7-10. Evening performances of this year’s fall play will take the stage Thursday, Friday and Saturday at 7 p.m. A matinee performance will be offered Sunday afternoon at 2 p.m.

In the insular, Puritan community of 1692 Salem, Massachusetts, a group of young girls are found dancing in the woods, and immediately fall ill. When no earthly cause can be determined, the citizens of Salem suspect that some more sinister force may be at hand.

As long-held grudges turn to violent disputes, humiliating secrets are exposed and disseminated, and the line between truth and pretense becomes increasingly blurry, the citizens’ dogged determination to root out evil becomes more dangerous than the evil itself.

When the burden of proof is invisible and the crime too terrible to name, everyone becomes a suspect and no one is safe.

“The Crucible,” Arthur Miller’s remarkable play, remains as relevant as ever, and carries with it a stern warning: in every community torn by suspicion, the most dangerous threat may be the community itself.

About the Cast and Crew

“The level of student ownership in this play really excites me,” said Shelley Daniel, Darlington theatre director. “This is our first student-designed set during my tenure and it’s creative and innovative.”

Darlington senior Abby Burris aspires to major in set design in college and has fully designed the set for this play.

“Abby has reimagined the Black Box configuration and has designed a set that is a giant metaphor of the play,” said Daniel. “The theater has been turned into a thrust format, one that our actors have never worked in before. Two sides of the audience will have a unique perspective, from jail cells. Their visibility will be altered, which is entirely reflective of the character experiences. The Black Box will feel very different to our audience.”

The Upper School stagecraft class has been hard at work building the set and props while the lighting and sound teams are doing an amazing job of supporting this important production. Lighting is being designed by Michael Hall (‘20) and Mary Prusakowski (‘22) and Leigh Barnes (‘20) designed the publicity artwork. All of the company headshots were taken by students in the media arts photography studio.

Daniel is also impressed with the depth shown by the cast as they tackle their roles.

“These are some of the hardest roles our actors have faced in recent memory,” she said. “Many are dream roles, requiring a tremendous amount of risk-taking, depth and vulnerability, and the actors are doing amazing work. This is the largest cast I have directed on stage in the Black Box with 26 actors and a crew of 14, totaling 40 students involved.”

Several classes of 11th-graders are in the process of reading “The Crucible” this fall and will enjoy a “page to stage” experience with a day showing of the play.

General admission tickets for “The Crucible” are $7 each and admission for Family Pass and Tiger Booster pass holders is free. Due to the limited seating available in the Black Box Theatre, guests are strongly advised to reserve tickets ahead of time at www.darlingtonschool.org/fallplay.

Please note: This production of “The Crucible” is rated PG-13 due to mature language and themes. The play has content that is not appropriate for younger audiences.