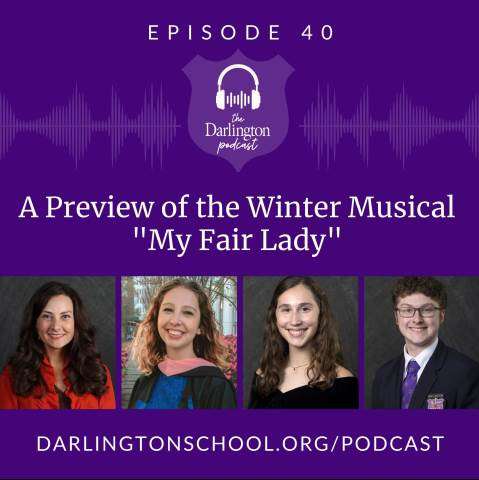 Darlington School: Episode 40: A Preview of the Winter Musical "My Fair Lady" ﻿﻿

Episode 40: A Preview of the Winter Musical “My Fair Lady” 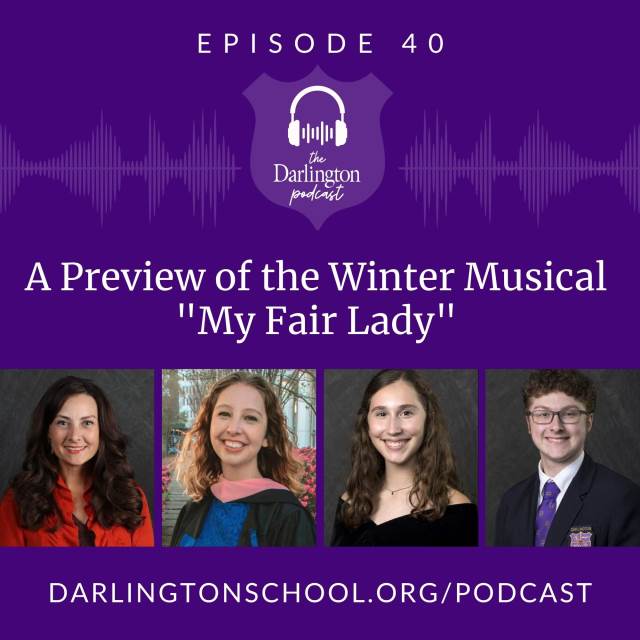 Welcome to Episode 40 of The Darlington Podcast!

In this episode, Theater Director Shelley Daniel talks with Choral Director Alex Johnson and seniors Kathryn Davidson and Grayson Davis about The Darlington Players' upcoming winter musical, "My Fair Lady." The show is slated for Feb. 25-27 at the Rome City Auditorium, featuring 22 students involved in the cast and crew.

"My Fair Lady" is based on George Bernard Shaw's 1913 play "Pygmalion," with a book and lyrics by Alan Jay Lerner and music by Frederick Loewe. The story follows Eliza Doolittle, a Cockney flower girl who takes speech lessons from professor Henry Higgins, a phonetician, so that she may pass as a lady. Despite his cynical nature, Higgins falls in love with her. The musical's 1956 Broadway production was a notable critical and popular success, winning six Tony Awards, including Best Musical. It set a record for the longest run of any musical on Broadway up to that time and was followed by a hit London production. A popular film version premiered in 1964, and many revivals have followed.

Shelley Daniel, who has served as theatre director since 2015, holds a B.A. in Communication and Theatre Arts from Mercer University, an M.F.A. in Theatre with an emphasis in performance from the University of Southern Mississippi, and an active K-12 Licensure in Theatre and Speech. She has directed and acted in numerous professional and collegiate theaters and has led acting workshops for students of all ages.

Alex Johnson, who's in her first year as choral director at Darlington, holds a B.M.E. and a M.M. in Choral Conducting from Georgia State University as well as a Georgia Educator Certificate in Music P-12. She is also a member of the American Choral Directors Association, the National Association for Music Education and the Georgia Music Educators Association.

Click here to learn more about the arts at Darlington >>

The Darlington Podcast is a collaboration between the communication and advancement teams, and is hosted by various members of the school community. Episodes are released each Thursday morning and available on most podcast platforms (search for The Darlington Podcast in your podcast player). Once new episodes are posted, you'll also be able to find them at www.darlingtonschool.org/podcast. Please subscribe wherever you listen to podcasts so that you'll get the latest episode each week!

The Darlington Podcast intro music was written and performed by Elliot Luitwieler ('22) and Kathryn Davidson ('22). Carson Raymond, director of major gifts, lends his voice, and the editing and production of this episode was handled by Maddie Fox, content manager.

If you have ideas for future episodes or have any questions about The Darlington Podcast, please email communications@darlingtonschool.org.