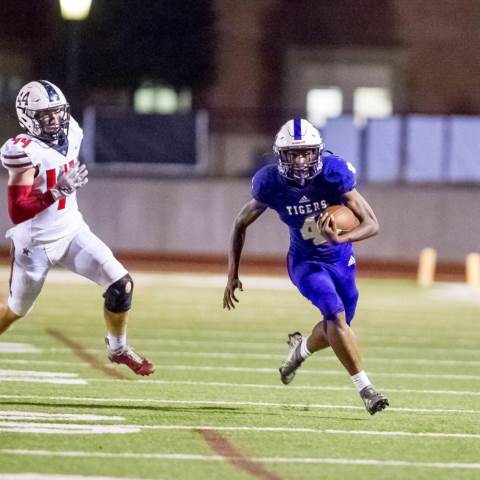 Varsity Football: Tigers pull away in second half for third straight win

The following article was published by the Rome News Tribune on Sept. 17, 2021 and was written by Alex Farrer.

The game got off to a bit of a slow start on Friday as Darlington and Heritage’s defense turned away the opposing offenses for much of the first half. But once the Tigers got going, they weren’t going to be stopped as they ran away in the final quarter for a 28-7 victory over the visiting Generals.

After Heritage scored on a long touchdown run on the opening drive of the third quarter to tie the game at 7-7, Darlington (3-1) responded a few minutes later with a 22-yard touchdown run by D’Marion Floyd and didn’t look back after that as they scored 14 more points in the fourth to put the game away.

“(Heritage) made a big play offensively there at the start of the second half, but our kids responded,” said Darlington head coach Tommy Atha. “That’s what I love about our kids. They never get their heads down. They just got the ball back and went and scored. They have the confidence that they can battle back no matter what happens.

“We have talked about finishing ever since the first week when we lost to Whitefield Academy. I felt like tonight we finished. That’s a sign of a maturing team.”

Floyd found the end zone again early in the fourth quarter on a 35-yard touchdown run to put the Tigers up by two scores, and then Caleb Thompson scored the final touchdown with less than five minutes to play on a one-yard plunge. Floyd and Thompson combined to run for 221 yards total with three touchdowns. Floyd led the way with 130 yards on 10 carries, and Thompson was steady as well with 91 yards on 18 carries.

“We’re really pleased with our group of backs,” said Atha. “We’ve got some explosive kids, and we have confidence in several of them. We’ve got some guys that are a change of pace from the others, but they all can contribute.

“And I’m really proud of our offensive line too. They just keep getting better and better. Heritage is a physical defense, and they bring pressure. It took us a little while, but we made some adjustments and the kids responded.”

The game was scoreless for most of the first half as each offense was able to move the ball into their opponent’s territory, but either unable to finish the drive or turned the ball over.

Darlington took the opening drive of the game deep into Heritage territory but fumbled it away inside the five-yard line. Bryce Travillian had the fumble recovery for the Generals (2-1), which was one of two on the night for the visitors as Paxton McCrary also had one in the fourth quarter.

Darlington’s defense forced three turnovers as well in the game with Patrick Shelley recovering a Heritage fumble and returning it to midfield in the second quarter. Talan Shirey also had an interception in the third quarter, and Alan Cordero recovered a Heritage fumble forced by Thompson in the fourth as well.

“The turnovers we forced tonight were really big, and it was even bigger that our offense capitalized on several of them,” said Atha. “That fumble Caleb forced in the fourth quarter was big because it gave us the ball right back with a chance to score and put the game away.”

The Tigers first got on the scoreboard with 4.9 seconds remaining in the first half on a 21-yard touchdown pass from Shelley to Shirey. Shelly finished 5-of-6 passing for 48 yards and the score, and Darlington’s other quarterback Jack Payne was solid as well with 72 yards on 9-of-12 passes. Shirey was the top receiver with five catches for 62 yards and the touchdown.

Darlington kicker Ryland Scott was a perfect 4-for-4 on extra points in the victory as well.

Heritage made the game interesting early in the third quarter on the opening drive of the second half when Julian Sexton raced 47 yards for a touchdown to tie the game at 7-7 before Darlington’s strong finish.

Darlington will be on the road next Friday as they try to continue their momentum when they take on King’s Ridge Christian at 7:30 p.m.