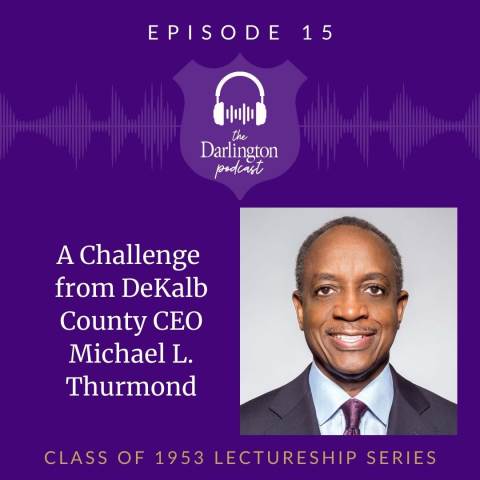 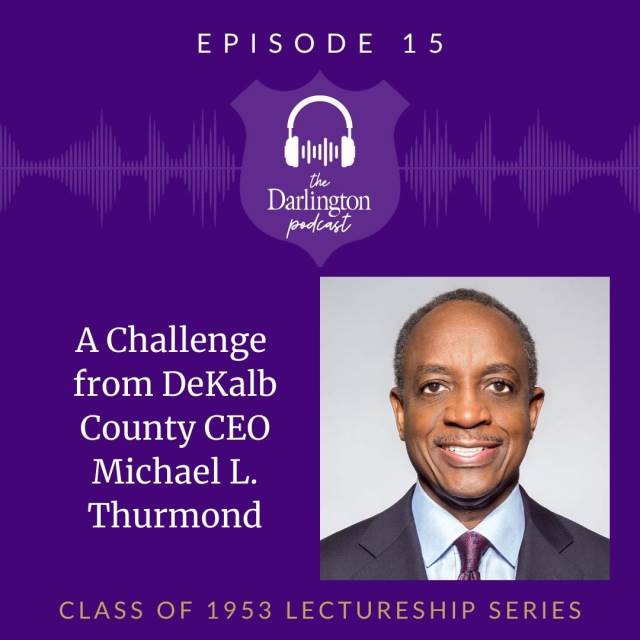 Welcome to Episode 15 of The Darlington Podcast!

In this episode we feature this year's speech from the 1953 Lectureship series with DeKalb County CEO Michael L. Thurmond. It was an incredible opportunity for our students to connect with someone who has had an outstanding career and has lived a life of service - and we hope that you will also be inspired by his message of service beyond self.

Michael L. Thurmond won a 2016 landslide victory to become chief executive officer of DeKalb County, one of the most diverse counties in the Southeast. Since his Jan. 1, 2017 swearing-in, Thurmond’s primary mission is restoring trust in county government.

A former member of the Georgia General Assembly and the first African-American elected to a statewide office without prior appointment, Thurmond is widely regarded as a “turnaround expert” after fundamentally transforming the culture and enhancing operations of complex organizations such as the Georgia Division of Family and Children Services, the Georgia Department of Labor, and the DeKalb County School District.

Thurmond was raised as a sharecropper's son in Clarke County, Ga. He graduated with honors with a Bachelor of Arts in Philosophy and Religion from Paine College and later earned a Juris Doctor degree from the University of South Carolina’s School of Law. He also completed the Political Executives program at the John F. Kennedy School of Government at Harvard University.

In 1986, he became the first African-American elected to the Georgia General Assembly from Clarke County since Reconstruction. During his legislative tenure, Thurmond authored major legislation that provided more than $250 million in tax relief to Georgia's senior citizens and working families.

Thurmond received a gubernatorial appointment to lead the state Division of Family and Children Services and direct Georgia's historic transition from welfare to work. He created the innovative Work First program, which helped more than 90,000 welfare-dependent Georgia families move from dependence into the workforce.

In 1997, Thurmond became a distinguished lecturer at the University of Georgia's Carl Vinson Institute of Government. The following year, he was elected Georgia labor commissioner.

During his three terms as labor commissioner, Thurmond’s most significant achievement was the construction of a $20 million school for children with disabilities at the Roosevelt Warm Springs Institute.

As superintendent of DeKalb schools from 2013-2015, Thurmond is credited with stabilizing the system during a governance crisis, upgrading its threatened accreditation, eliminating a multimillion-dollar deficit, and improving student academic performance and graduation rates.

Also an author and lecturer, Thurmond’s latest book, "Freedom: Georgia’s Antislavery Heritage, 1733-1865," was awarded the Georgia Historical Society’s Lilla Hawes Ward. In 2004, The Georgia Center for the Book listed "Freedom" as one of The 25 Books All Georgian’s Should Read.

The Darlington Podcast is a collaboration between the Communication, Advancement, and I.T. teams, and is hosted by various members of the faculty and staff. Episodes are released each Thursday morning and available on most podcast platforms (search for The Darlington Podcast in your podcast player). Once new episodes are posted, you'll also be able to find them at www.darlingtonschool.org/podcast. Please subscribe wherever you listen to podcasts so that you'll get the latest episode each week!

The Darlington Podcast intro music was written and performed by Elliot Luitweiler ('22) and Katherine Davidson ('22). Head of School Brent Bell introduced the Lectureship speaker in the original recording. Carson Raymond, director of major gifts, lends his voice and editing and production is handled by Jennifer Collins, content manager.

If you have ideas for future episodes or have any questions about The Darlington Podcast, please email communications@darlingtonschool.org.