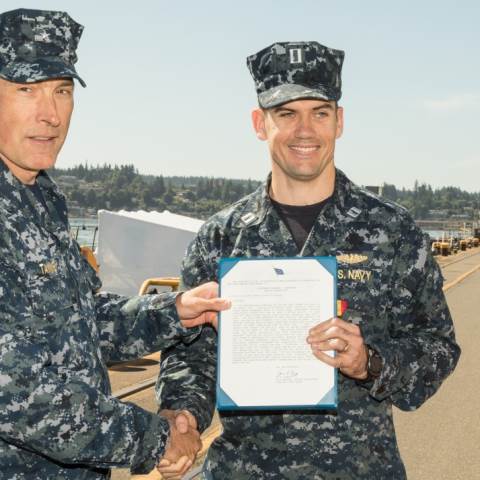 We're excited to connect with our alumni through our new Darlington Connects series. Today we hear from Andrew Lawrence (‘03), a Lieutenant Commander in the  U.S. Navy Submarine Force.

Andrew Lawrence (’03) currently serves in the U.S. Navy Submarine Force as a Lieutenant Commander. He earned a B.S. in Aerospace, Aeronautical, and Astronautical Engineering from the United States Naval Academy and a Masters of Public Administration from Harvard Kennedy School. Andrew has served in the Navy for 13 years and he has lived across the globe throughout his active duty. From now until November, Andrew is pursuing additional naval training. Upon completing his training, he will return to Kings Bay, Georgia to serve as the Executive Officer on the USS Tennessee. Personally, Andrew and his wife are the proud parents of two sets of twins (yes, two sets of twins!) aged three and four, respectively.

Andrew moved from Florida to Rome when he was in high school and attended Darlington for his junior and senior years. He credits Darlington for the path he has pursued both professionally and educationally. While at Darlington, he recalls shaping his time management and organizational skills. This discipline made for a seamless transition to the Naval Academy. When asked if Andrew encounters any Darlington connections in his job he said, “Darlington is a well-known reference. When Darlington is mentioned, the conversation always leads to common ground.”

Andrew has achieved an immense amount in his career thusfar. He served as the Weapon Officer on the USS Ohio for two years. During this chapter, he was given the opportunity to build, and lead, a unique team. His team, along with some of the sailors on his vessel, were awarded a Battle W Excellence Award for the best Weapons Departments onboard the Aircraft Carriers, as well as a Battle E Award for the best ship handling, weapons employment, tactics, and ability to fulfill mission objectives.

As the Covid-19 pandemic impacted our country, one of Andrew’s Harvard professors asked him if being a submariner prepared him for quarantine.  In response, Andrew completed a paper for his professor, who encouraged him to publish the piece. On May 2, Surviving Isolation: A Submariner’s Tips That Could Help in Coronavirus Hell was published on The National Interest website.

Andrew is a true embodiment of Darlington’s motto, “Wisdom More Than Knowledge, Service Beyond Self, Honor Above Everything.” He is looking forward to being involved with the Darlington Connects program and connecting with students and alumni who are interested in pursuing a career in the Navy.

Are you a Darlington alum (or do you know one) with a career or interest that is fascinating and unique? We'd love to spotlight you in a future blog! Please email connect@darlingtonschool.org if you are interested in being featured.