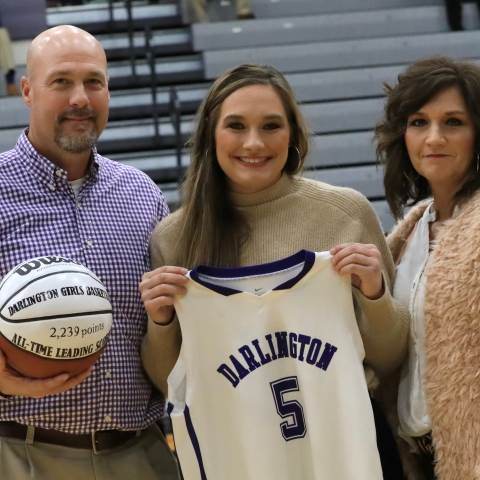 Atha’s love for basketball began as early as third grade. She played competitively throughout middle school and couldn’t wait until her freshman year to play high school ball with her older sister, Maggie Beth (’14). Unfortunately, fate had a different plan. A torn ACL during eighth grade and a meniscus tear early in her freshman year kept her on the bench.

“At the time, my injury was devastating. Little did I know that it was actually a blessing in disguise,” she said. “It forced me to redefine my work ethic, and now I never take the game for granted. I play knowing that I could get hurt any time I step on the floor and that every time I play could be the last.”

“Anna Claire’s injury not only forced her to change her game, but gave her an opportunity to improve it dramatically,” added her father and coach, Tommy Atha. “Up until that point, she had relied on being physical and trying to get to the basket all the time. Recovery gave her time to focus on skills that she hadn’t focused on before.”

The two worked closely together on the recovering athlete’s shooting and ball-handling skills. As father and daughter, Tommy and Anna Claire’s coach-to-player relationship has been a special one.

“We’ve learned over the years to never take basketball home with us. What happens in the locker room stays in the locker room,” said Anna Claire. “My dad is my best friend, and it was a blessing having him as my coach. He’s harder on me than anyone else has ever been, and that has made me a better player.”

“Anna Claire’s passion for the game and her understanding of the individual work required to be a great player have always been inspiring to me,” added Tommy. “I am extremely proud of her as a father and a coach. She’s not only a great player, but she’s a leader and a great teammate.”

“Before I got hurt, I was an awful shooter,” said Anna Claire. “After my surgery, I would go to the gym and shoot while seated in a chair, which helped me hit baskets from all over the court.”

“We had to get as creative as we could,” said Tommy. “Anna Claire and I worked for hours on her fine motor skills. She started by dribbling a tennis ball, and then we would juggle the balls back and forth to each other.”

After returning to the court as a sophomore, Anna Claire scored an average of 21-27 points per game throughout her varsity career. This earned her statewide recognition and the interest of multiple college coaches, including seven scholarship offers. As a junior, Anna Claire committed to Wofford College.

When her senior year began, Anna Claire was laser-focused on making her final season at Darlington count. Fittingly, she would once again be coached by her father – just as she had been in her first season as a Lady Tiger in sixth grade. The team had a winning season, finishing undefeated in the region and ending their state run in the Elite Eight.

Anna Claire is now a sophomore guard at Wofford College in Spartanburg, S.C. She played in all 30 games during her freshman season, scoring a career high 14 points in Wofford’s win over Furman and eclipsed double-figure scoring six times during the season.