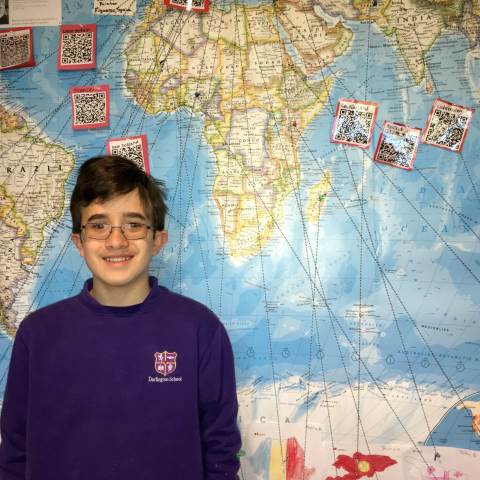 
Sixth-grader Ethan von Bergen has qualified to represent Darlington School in the state level competition of the National Geographic Bee on April 6 at at Georgia College and State University in Milledgeville, Ga.

“Ethan has proven to have a passion for Geography and the cultures of the world,” said Angela Pieroni, eighth-grade science teacher and  assistant director of Pre-K to 8. “In addition, he has shown his persistence by being a sixth-grader and already a two-time Darlington winner, now advancing to State! We are so proud to have Ethan represent Darlington.”

The initial leg of the Darlington competition consisted of seven rounds of 35 questions per round. The top ten contestants continued to the next round and elimination continued until there were only three students left. A final round was held to determine the winner.

“It felt great to defend my title from last year and the competition at Darlington was even stronger than before,” von Bergen said. “I studied a bit harder for the online test and was really surprised when I learned that I made it through.”

“I always stand amazed by the confidence which our students show in their knowledge of not only the United States, but of the world at large during the Geo Bee,” said Steve McConnell, third grade teacher. “Ethan really had to fight his way through this year's Geo Bee, with a strong field of ten finalists. I'm so proud of his tenacity and I'm excited to see him progress to the state level. I am a big fan of exposing our students to experiences that open their minds to the world in which they live and the Geo Bee is one of the best ways we do this!”

Von Bergen will compete at the state level against 98 qualifiers from around Georgia. The winner from each state and territory will then advance to the national competition, which will be held May 20-23 at the National Geographic Society headquarters in Washington, D.C.