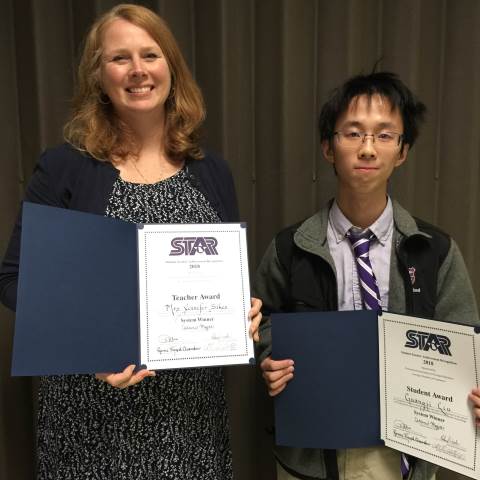 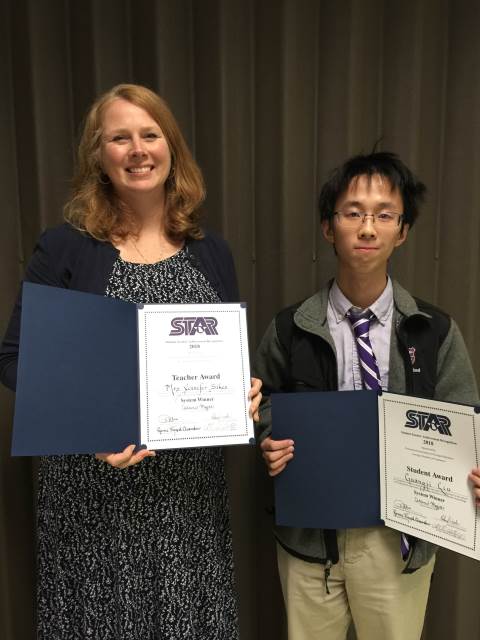 The announcement was made on Friday, Feb. 23 at the Region STAR Banquet at The Palladium in Rome, Ga.

Peter Liu is has taken 13 AP and Honors courses. He has received the E.L. Wright Award for AP Chemistry, AP English Language, and English 2 Honors and was a member of the GCTM Division AA Championship Team. He has also received the A.J. Huffman Jr. (‘67) Memorial Award and the Phi Beta Kappa Book Award. Liu has served as a member of the robotics team, math team, has run cross country and track & field, and served Darlington as a school tour guide. Liu is the son of Mr. Ruitao Liu and Mrs. Qinqing Zhou in Chongqing, China.

“Mrs. Sikes has always been the most tolerant with my third-rate handwriting,” Liu said. “Her classes have allowed me great freedom to explore, and her passion towards literature has showed me that instead of offering escapes from reality, fiction really shows how interesting everything can be. I am very fortunate to be her student.”

Jennifer Sikes has taught English at Darlington since 2010. She has a B.A. from Shorter College; M.A. from Clemson University; and ABD from the University of Georgia. Prior to coming to Darlington, Sikes served as Asst. Professor of English and Writing Center Founder and Director at Shorter College.

“Peter Liu is one of those ‘once in a lifetime students,’” Sikes said. “He’s the type of student who is driven by an instinctive curiosity, and for this reason, he is an avid reader. A true philosopher at heart, Peter is fascinated by words and what kind of meaning is made (or not made) by them and he understands the power behind words.”

Locally, the STAR Students and their selected STAR Teachers are honored by their schools and recognized by the Rome Floyd Chamber, which serves as the local sponsor of the STAR program. Students then compete for local school system titles, and those winners move on to compete for regional honors.

Liu and Sikes, along with other regional winners, will compete for the honor of being named State PAGE STAR Student at an upcoming banquet hosted by the PAGE Foundation in Atlanta.

“Peter exemplifies our Darlington mission: he learns with passion, serves everyone he meets with respect, and more than anything, he places honor above all,” Sikes said. “I’m so thankful Peter courageously left his home in China to study in America because I would have never had the opportunity to learn from him.”

The PAGE Student Teacher Achievement Recognition (STAR) program, now in its 60th year, is sponsored, administered and promoted by the Professional Association of Georgia Educators (PAGE). Since its creation by the Georgia Chamber of Commerce in 1958, the STAR program has honored nearly 26,000 students and the teachers selected as the most influential to their academic achievement. To obtain the 2018 STAR nomination, high school seniors must have the highest score on a single test date on the SAT and be in the top 10 percent or top 10 students of their class based on grade point average.