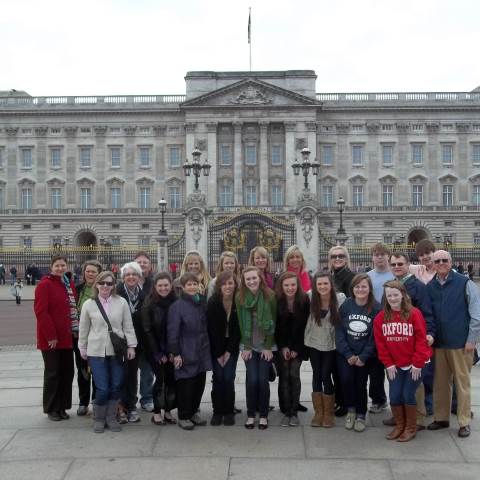 Each day of the trip will be busy with activity, and the first is no exception. After arriving in London March 4, the group will travel to Windsor Castle for a morning visit before heading to Canterbury. There, they will tour Canterbury Cathedral and spend the night at the Canterbury Cathedral Lodge.

The next day will be spent in Oxford, England's most renowned university town, and will include tours and free time for shopping. The group will dine and spend the night at The Bear, a 13th century coaching inn in the nearby village of Woodstock.

Monday, they will tour Blenheim Palace, the birthplace of Winston Churchill, before driving to Bletchley Park, the secret British code-breaking center where the German Enigma code was broken during World War II. Next, they will head to Stratford-upon-Avon to tour Trinity Church, New Place and the Edward IV Grammar School, where Shakespeare studied as a boy. They will spend the night at the Stratford Hotel.

Tuesday, the group will head to Warwick Castle, one of the great medieval castles of England, where they will have lunch before driving to London to check into the Trafalgar Hilton for four nights.

The next three days will be spent touring London sites such as the Tower of London, Kensington Palace, the Houses of Parliament and Westminster Abbey, to name a few. They will have the opportunity to see the Changing of the Guard at Buckingham Palace, explore museums, shop at Harrod's, and attend theatre performances. The group will also have a formal afternoon tea for the group at Fortnum and Mason's.

The group will depart from London on Saturday, March 11, arriving back in Atlanta that evening. Cost of the trip is $4,850 per person, which includes roundtrip airfare, accommodations, breakfasts, all dinners outside of London, all sightseeing per itinerary and entrance fees, transportation, tour guides and service charges and taxes. A non-refundable deposit of $500 is due by Sept. 15. Final payment is due Dec. 1.