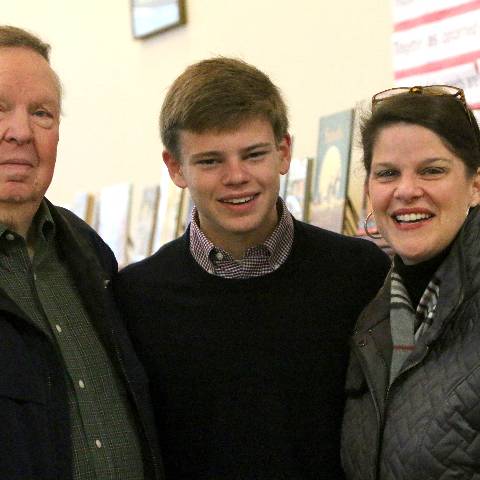 ”Being part of a legacy family at Darlington is a gift that my family has chosen to pass on through the years,” said Crawford. “It is a tradition that is meaningful to each of us.”


As the executive assistant to the dean of college guidance, Crawford’s smiling face is no stranger to Upper School students. In this role, she works with seniors to process applications and scholarship information, forming relationships with students during a very crucial time of transition. Crawford joined the Darlington team in August 2003 as the Upper School library assistant.

It will surprise many to know that she is not the first of the Brown family to spend her time using her talents and gifts to contribute to Darlington from her first floor office in Wilcox Hall.

In the late 1950s, Crawford’s parents, Henry and Patti, actually lived in the apartment that is now her office. Steps away from Crawford’s computer is an office where her oldest brother slept in his crib. A supply closet once served as the family’s kitchen, and a conference room, a living room.

While at Darlington, Henry Brown taught Middle School English and history, coached football and track, and along with his wife was a dorm parent who lived in what was then-known as the Old Main building.

The Browns’ time at Darlington was several years before their baby girl came into the picture, but Crawford enjoys hearing them reminisce nonetheless.

“I love listening to my father tell stories to our children about his days [here] and seeing them picture him walking down the same hall, or sitting in the same classroom that they are in every day,” added Crawford.

In addition to her immediate family, Crawford’s great-grandfather, Dr. George B. Smith Sr., was affiliated with the school as a long-term chairman of the Board of Trustees. Several of Crawford’s in-laws also graduated as Tigers.

Madge (Brown) Crawford holds a Bachelor of Arts in marketing from the University of Georgia, and also graduated from the National Center for Paralegal Training.

In addition to her work in college guidance, she has served two terms on the Alumni Council, and is an active member of St. Peter’s Episcopal Church in downtown Rome.


“We are all proud to be a part of Darlington School and value that bond and tradition,” said Crawford. “We consider it a privilege.”