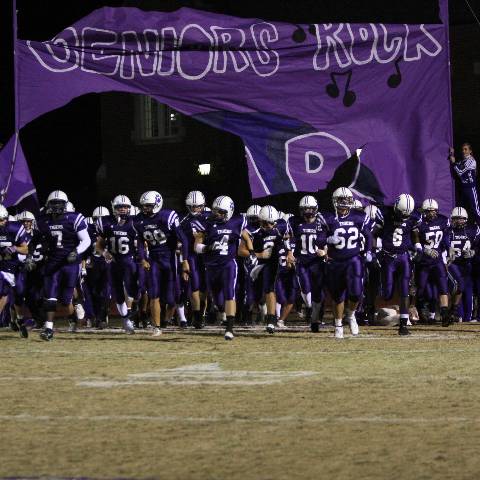 The Darlington football team had a very simple choice to make Friday night: The Tigers could either step up … or step aside. Led by a stellar defensive effort, the Tigers emphatically made their decision.

With their playoff lives hanging in the balance, the Tigers came up with big plays at big moments, and downed Rockmart 24-14 in the regular-season finale for both teams at Chris Hunter Stadium. The victory sends Darlington (8-2, 5-1) to the playoffs as Region 7-AA’s No. 3 seed, while Rockmart — which entered the night riding a seven-game winning streak — is out.

“This is an awesome feeling for us, especially for the seniors,” said Darlington’s Tyson Betts, who teamed up with Collie Powers and Patrick Wilson to make numerous game-changing plays. “We knew we had to play our best game, and I feel like we definitely did that.”

Darlington will face the No. 2 seed from Region 5-AA next week on the road.

The Tigers missed the playoffs last year after a final-week loss to Rockmart cost them a berth.

“It’s wonderful to be going back,” said Darlington coach Tommy Atha. “No matter how many times it happens, it’s always an incredible experience. You never get tired of it.”

Darlington wasn’t widely favored to win the game, but apparently the Tigers weren’t aware of their underdog status. Or perhaps they just used it as a motivation. Either way, it worked out well for the Tigers, who put together a stalwart defensive effort.

“There’s no question that Rockmart is the most explosive offensive team we’ve faced this season,” said Atha. “But (defensive coordinator) Mitch Jordan had a great game plan, and the kids did a terrific job of executing it.”

The Tigers managed to contain Rockmart’s supremely-gifted quarterback, Brandon Haywood. Though he finished with strong numbers (266 total yards and two touchdowns), Darlington never allowed him to take over the game.

“I think this was our best defensive game of the year, especially the guys in the secondary,” said Betts, who then smiled and added: “And I’m not just saying that because I’m one of them.”

Rockmart hurt its own cause with 12 penalties, totaling 88 yards. “Penalties and turnovers are things you can’t afford to have in a game like this,” said Rockmart coach Dan Duff. “But give credit to Darlington. They had a great defensive scheme.”

Overall, Rockmart’s nine offensive possessions resulted in four punts, one lost fumble, one turnover-on-downs, and two touchdowns. (The Jackets also had the ball when the clock ran out). Darlington took charge by scoring on each of its first two possession. Collier capped both drives — scoring on runs of 27 and 3 yards — to give the Tigers a 14-0 lead at the 4:43 mark of the first quarter.

NOTE: Friday’s victory came on a night when the team honored athletic director Jerry Sharp, who is retiring at the end of the year. The former coach led Darlington to a state championship in 1998.