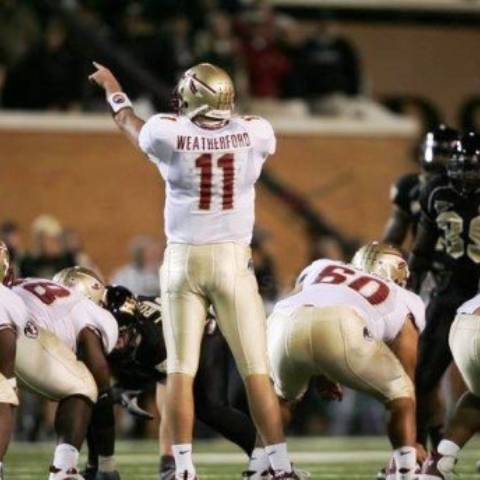 
No. 39 Chantz McClinic ('04) lines up over No. 60 Ryan McMahon ('06) during the 2007 Wake Forest vs. FSU game. Photo by Gene Galin, accfootballphotos.com
Just as Darlington is making the drop from Class AA to A, a half-dozen former Tigers are making names for themselves at college football’s highest level, the NCAA’s Football Bowl Subdivision (formerly known as Division I-A). When Patrick Collier (’08) learned he had survived the walk-on cut at Auburn University in mid-August, he became the sixth Tiger to land on a FBS roster, joining Chantz McClinic (’04) and Derricus Ellis (’08) at Wake Forest University, Ryan McMahon (’06) and Shawn Powell (’07) at Florida State University, and Luke Hyder (’06) at the U.S. Air Force Academy.

“I think it is a tremendous honor to have six Division I-A kids from any athletic program, particularly a Class A program,” said Tommy Atha, Darlington’s head varsity football coach. “It shows tremendous interest in and enthusiasm for football at Darlington. I think it also speaks well of our school because coaches want to come here to look for kids who will be an asset to their programs both athletically and academically.”

McClinic enters his fifth-year senior season for the nationally ranked Demon Deacons as the starter at the weakside linebacker position. He has played in more than 30 games for Wake, including 11 in 2007 when he became a full-time starter. McClinic played in a backup role his sophomore season, but saw plenty of time on special teams when Wake Forest won the 2006 ACC championship. In 2003, as a senior at Darlington, McClinic was a first-team All-Area player at fullback and linebacker, leading the Tigers to the second round of the state playoffs.

Jim Grobe, head coach at Wake Forest, said he’s been pleased with what McClinic has done. “He’s been a really good player for us for a couple of years now,” said the 2006 ACC and National Coach of the Year. “He’s a good leader for us. He’s got a great work ethic … he’s good both on and off the field. Obviously we’ve got to have really good football players here for us to have a chance in the Atlantic Coast Conference, but the No. 1 thing we look for is character. We had a great example of that in Chantz, and when we knew that it got us really excited about Derricus.”

Ellis, McClinic’s half-brother, graduated from Darlington in May after signing with Wake Forest in February. Ellis committed in the summer of 2007 and, later, earned first-team All-Area honors as a defensive end. According to Wake Forest assistant athletic director for media relations Steve Shutt, he will be redshirted this year but may dress and travel with the squad.

In August, Powell learned that he would become a starter in just his freshman season at Florida State. He signed with FSU in 2006, but did not enroll until 2007 after a stellar three-sport career at Darlington, where he was All-Area in football and basketball. During his senior season, Powell averaged 51 yards per punt on his way to Class AA All-State honors. He made his first start when the Seminoles played Western Carolina Sept. 6.

“Shawn is the most gifted kicker I have been around in more than 15 years of coaching,” Atha said. “He’s got a chance to be really special. He’s also a great young man that people flock to. We’re very excited about the opportunity he has with Florida State.”

McMahon exploded onto the scene in 2007 as a redshirt freshman for the Seminoles. He took every snap in every game at center, a move he made from defensive tackle in the offseason. He only gave up two sacks in more than 900 plays and was named to the Freshman All-America first team. Three times, McMahon went the entire game without missing an assignment. His name was even added to the watch list for the Rimington Trophy, named after former All-American and Nebraska center Dave Rimington and awarded annually to the nation’s top center. McMahon was also named preseason All-ACC third team by Phil Steele.

McMahon came to Darlington as a junior in 2004 where he quickly became a dominant force. He was a two-time All-Area player and first-team All-State his senior season, helping the Tigers to a second-round playoff appearance. “Ryan is the most dominant lineman I’ve ever coached,” Atha said. “He is so explosive, has great hips, and is a very good athlete overall – all attributes that serve him well when you consider the fact that he may have to block a huge defensive tackle on one play and a fast linebacker on the next.”

Hyder received an appointment to the Air Force after graduating with McMahon in 2006. Also an All-Area fullback and linebacker for the Tigers, Hyder has been an impact player for the Falcons on special teams. He is currently in the rotation at the “Z” receiver position on offense after moving over from safety in the spring. The staff at Air Force is excited about Hyder’s future.

“Luke Hyder is exactly the kind of young man that we want here at the Academy,” said Mike Thiessen, Air Force receivers coach. “He’s an extremely hard worker, is a team player, and brings a very high energy level to our team.”

Hyder and Collier were close friends when Hyder graduated from Darlington in 2006 during Collier’s sophomore year. Much of the work ethic that helped Collier make the walk-on cut at Auburn, he says he learned from Hyder, whose tireless and relentless conditioning helped him to a 49-0 record and state championship at the 171-pound division on the wrestling mat his senior year.

“There is no question that when we measure a great work ethic and commitment in a Darlington football player, it’s Hyder and Collier who set the standard,” Atha said. “They weren’t great players for us just on Friday nights; they were great players in practice, in the film room, the offseason … who dedicated themselves to becoming the best player they could be. And I could not be prouder of any former player than I am of Patrick. It was his dream to play football for the team he grew up loving, and he’s living that.”

Although all of these former Tigers are playing for quality football programs that have opportunities to compete at a high level nationally and for respective conference championships, it was their academic performance that opened those doors.

And Atha is confident that the reason college coaches like to recruit at Darlington is because they know they are getting well-rounded student-athletes. “I think they know that when our kids get to them they will be well-coached,” he said. “I also believe that if a player graduates with a Darlington diploma, he will be self-disciplined and come to them with a great work ethic.”

Grobe agrees. “The thing we saw in Chantz and Derricus was that not only do they have good football ability with a good work ethic and good character, but they come from a great school,” he said. “With them coming from Darlington School, it’s a home run, because at Wake Forest you’ve got to be committed to academics to leave here with a degree. So not only did we get a good football player in Chantz and a good football player in Derricus … we felt like we got two kids who will come into Wake Forest and leave with a degree.”