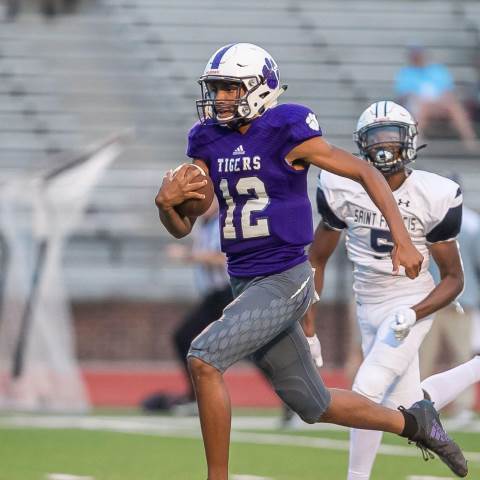 Darlington School: The Comeback at Lakeside: Darlington storms back from down 21-0 to defeat Mt. Paran by three points on homecoming ﻿﻿

The Comeback at Lakeside: Darlington storms back from down 21-0 to defeat Mt. Paran by three points on homecoming


Darlington quarterback Patrick Shelley takes off for the end zone during a game against St. Francis at Chris Hunter Stadium on Sept. 18. Shelley scored twice in Darlington's comeback win vs. Mt. Paran on Oct. 23. Photo by Steven Eckhoff

This article, written by Michael Baron, was originally published by the Rome News-Tribune on Oct. 23.

Eleven months ago, the Darlington Tigers had their 2019 season come to a screeching halt at the hands of the Mt. Paran Christian Eagles by three points.

Fast forward to Friday, and it would be the Tigers with the final, triumphant roar in dramatic fashion.

Down 21-0 early in the second quarter, the Tigers marched all the way back to defeat Mt. Paran 30-27 in one of the most dramatic comebacks in Darlington football history.

The “Lakeside Comeback,” as it will (maybe) be known by, propelled Darlington to 5-2 overall and a 1-0 start in Region 7-A Private.

“It’s one of the most rewarding games because (of) seeing our kids refuse to give up, seeing our kids refuse to hang their head,” Tigers head coach Tommy Atha said. “Before we come out on the field, we have 10 things we put up ... and one of them is believe in a system, it will not fail you. That’s the thing we sell our kids on. If you’ll do your job and trust the coaches to do their job, it works and that’s the thing I think they do believe.”

Mt. Paran Christian punched Darlington in the mouth right out of the gates, as the Eagles took just 96 seconds on a 4-play, 80-yard drive to find the end zone for the game’s opening points.

The Eagles would score touchdowns on their first four offensive possessions, as the three-pronged rushing attack of Jett Allen, Sam Griffith-Tesch and Nick Germain gave Darlington fits. The three would combine for all four of Mt. Paran’s touchdowns.

“I’ve got to hand it to their kids,” Atha said. “They came out with tons of emotion. They were physical. They were the more aggressive team in the first half.”

Down 21-0 a mere 13 seconds into the second quarter, the stunned homecoming crowd and the Tigers on the field were searching for answers. And quarterback Patrick Shelley answered the call.

Shelley called his own number and took off 61 yards down the right side of the field for a touchdown just 31 seconds after the Mt. Paran score.

“Anytime No. 12 has the ball in his hands, there’s a chance a big play’s going to happen, whether it’s through the air or on the ground,” Atha said.

Mt. Paran’s Jett Allen responded with his second rushing score of the day minutes later, but another Allen dressed in purple and white used some hard-nosed blocking and crossed the goal line from 11-yards out to cut the Eagle edge to 27-14 with 7:45 to play before halftime.

Darlington’s defense set the tone the rest of the way. Early on, Mt. Paran had little trouble reaching the edges or finding spaces to run. That became swallowed up, as after Jett Allen’s second TD run, Mt. Paran managed just three plays of more than 7 yards.

Joseph Marion’s sack with less than two minutes to play would put an exclamation point on the second-half defensive performance.

Meanwhile, the Tiger offense found itself within one score as senior Harrison Allen took it in from 21 yards out. A defensive stand inside the 5-yard line and a safety would set the stage for Shelley to lead the 21 and 13-point rally.

“His leadership from the very beginning of the year to now, he’s just improved every single week and these kids have so much confidence in him,” Atha said. “He’s become more vocal. He’s taken ownership of the offense moving people around. I certainly wouldn’t want to have to defend him.”

One thing is for certain: the Lakeside Comeback will go down in the lore of Darlington football history.