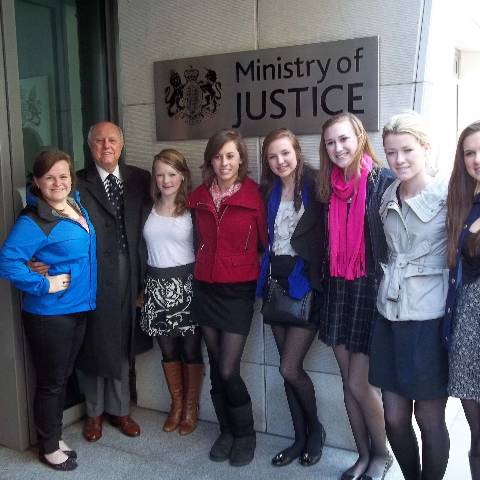 While on a spring break trip to England, a group of Darlington students and parents were fortunate to have the unique opportunity to meet privately with the Rt. Hon. Kenneth Clarke QC MP, the Lord High Chancellor of Great Britain and Secretary of State for Justice.

“I think what impressed me most about the Lord Chancellor was his absolutely wonderful sense of humor and how down-to-earth he seemed,” said Sam Moss, dean of college guidance and one of the chaperones of the trip. “His easygoing, relaxed manner put all of the students at ease. He is a wonderful storyteller and raconteur – I could have listened to him for hours!”

The Lord Chancellor, also known as the Justice Minister, is appointed by the Queen on the advice of the Prime Minister and acts as the custodian of the Great Seal of England. He is a member of the Privy Council and the Cabinet and serves as one of the Great Officers of State. He is also head of the Ministry of Justice and President of the Supreme Court of Judicature, supervising the Court of Appeal of England and Wales, the High Court of Justice of England and Wales, and the Crown Court of England and Wales. The Lord Chancellor oversees everything from prisons and probation to constitutional affairs and also determines which lawyers are to be raised to the rank of Queen’s Counsel.

“He also issues all royal wedding licenses, having recently issued one for the upcoming wedding of Prince William and Kate Middleton in just a few weeks,” Moss said.

The Lord Chancellor is outranked only by the Royal Family and the Archbishop of Canterbury, and his salary is higher than that of any other public official in the British government, including the Prime Minister.

“He is also one of the five persons who participate in determining the capacity of the Sovereign to discharge his or her royal duties, as was depicted in the recent movie ‘The King’s Speech,’” Moss said.

Darlington’s group met with Clarke on what his diary secretary called “the busiest day of the Parliamentary year.”

“She said that all sorts of government officials were trying to see the Lord Chancellor that day before Parliament was presented with the government’s budget at noon, and he asked her to tell them that he was meeting with students from Darlington School in the U.S. and wouldn’t be able to take any appointments,” Moss said.

Sophomore Camille Temples said she was honored that Clarke made time for them on such a busy day. “Outside the conference room, there was even a kiosk that featured Darlington School as one of his appointments,” she said. “I really enjoyed learning about the politics of England from someone who is involved at a high level.”

Clarke spoke with the students about the differences between the British Parliamentary system and the U.S. system of government, explaining the concept of the shadow cabinet, discussing such terms as “back-bencher,” “the loyal opposition,” and explaining how Parliamentary votes are taken by actually leaving the House Chamber and re-entering by the “Aye” door or the “Nay” door to be counted as they entered.

“He seemed to be enjoying himself immensely, talking with the students and answering their questions, and his secretary practically had to drag him out of the room to get to his next meeting,” Moss said. “This was an experience that I will never forget – and definitely a highlight of all of my many trips to England through the years.” 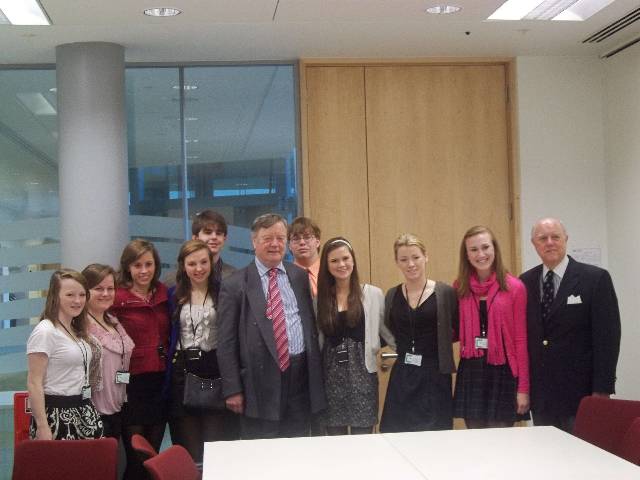