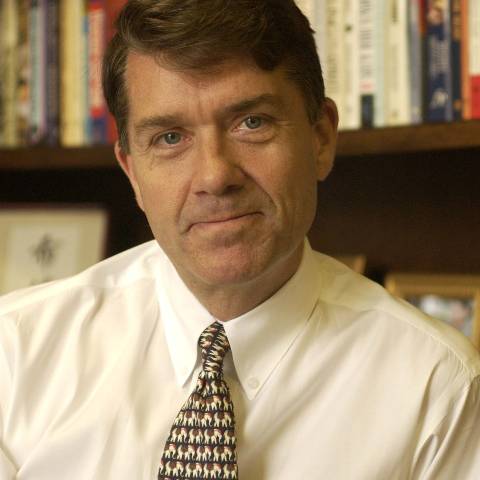 
President David Hicks
Darlington School President David Hicks announced his plans to retire at the end of the school year during the School’s weekly chapel service today. Acknowledging the difficulties he has faced this year in dealing with divisions within the School community and attacks on the School’s leadership in response to an opinion article written in the September issue of The Darlingtonian student newspaper by then-chaplain Father John Merchant, President Hicks told faculty and students that he feels his best service now is to move on to enable the School to unite behind the search for a new president and the celebration of its centennial.

He and wife Betsy will pursue a long-held dream of personally building a home in Montana. “These have been the five happiest years of my life, and Betsy and I will cherish forever our many Darlington friends and the beautiful memories of our years as Romans,” Hicks said.

Roby Robinson, Board of Trustees chair and a 1958 Darlington graduate, said, “The contributions David Hicks has made in just five years to a school that has been in Rome for almost a century will last forever.” Hicks was hired in 1999 and asked by the board to focus on several areas needing immediate attention. The quality and future of the School’s boarding program was at the top of this group’s list. “Darlington needed a man like David who is not afraid to take a position and work undeterred to meet the goal. He came to Darlington at a time in its history when it was basking in nearly a century of success and was instrumental in helping us take a fresh look at ourselves in preparation for the School’s second century of college preparatory education. I am confident that the School and the Rome community will look back on David’s tenure as a significant turning point in its future. Change is always unsettling, but is critical to the growth of both individuals and institutions,” Robinson said.

“I am disappointed that circumstances have resulted in David’s leaving at the end of this school year,” Darlington Headmaster David Rhodes, said. “David is very bright and I have learned so much from working with him. He pushed us all to use technology to its full advantage in the classroom. David brought to us a program that we will use for years to come, which is an annual community-wide reading project that has students, faculty, parents, and alumni all read the same book and then offers them the opportunity to hear a presentation by the author in the Huffman Center,” Rhodes said. “He has challenged us to think, to stretch, and to grow, and I will miss David and his vision.”

President Hicks will continue to perform his duties in his role as president until the end of the year while also focusing on the development of programs designed to attract boarding students with special interests and skills. Darlington School three-day eventing for serious equestrians, as well as a year-round soccer academy and tennis academy, are already in the early stages of development, and the School is also searching for a swim coach to direct a club for competitive high school swimmers.

“David Hicks has led Darlington into the twenty-first century knowing it has a real future because of significant changes he has led the School to make,” Billy Mitchell, immediate past chair of the Board of Trustees and also a 1958 Darlington graduate, said. “Under his leadership, Darlington now has a master plan establishing aggressive goals for new facilities as well as academic goals for the next 10 years. Because of his instrumental leadership in South Rome redevelopment activities, Darlington will have an even closer tie to Rome,” Mitchell said.

Prior to becoming Darlington’s president in April 1999, David Hicks was headmaster at top independent schools in Texas and New Hampshire. Hicks is a graduate of The Stony Brook School, Long Island, N.Y., and received his bachelor’s degree from Princeton University and his master’s degree from Oxford University, England, where he was a Rhodes Scholar. He is the author of two books, Norms & Nobility: A Treatise on Education (1981) and The Emperor’s Handbook: Marcus Aurelius (2002), as well as numerous articles, reviews, homilies, and essays.

Hicks’ five-year tenure at Darlington has been focused on responding to Goals 2000, a mandate that members of the School’s Board of Trustees, senior administrative staff, and he set after several months of planning following Hicks’ appointment as Darlington’s sixth president in April 1999. In response to the first goal, to improve boarding retention, the School redefined its boarding program as an English House system, turning four dorms into six Houses, three for girls and three for boys. Two new girls houses were constructed in the past year, with girls in Erlandson House moving into their new House before Christmas and girls in Griffeth House scheduled to move in mid-January. Student prefects in each House, under the guidance of a head of house and assigned faculty, coordinate all areas of student life. The heads of house also serve as admission officers for the School.

Another Goals 2000 mandate, to broaden technology initiatives, led the School to design a Web site, www.darlingtonschool.org, that allows students, faculty, and parents to track individual student progress through a secure Intranet and allows parents of boarders to be involved in the daily lives of their children. All faculty members use the online grade book and post additional research information, comments about student progress, and homework assignments. A new information technology communication department was created last year to incorporate all technology courses offered and to broaden the variety of courses offered to students. An office of information technology was formed at the beginning of this school year to further maximize use of technology throughout all areas of the School.

In addition to these sweeping programmatic changes, President Hicks’ tenure is also characterized by the opening of new facilities such as the 96,000-square-foot A.J. Huffman ’67 Memorial Athletic Center, renovations to create head-of-house residences, construction of two new girls houses, acquisition of property surrounding the main campus, as well as planning for a new Middle School.

In the Rome community, he has been instrumental in the development of the South Rome Redevelopment Corporation which seeks to improve the quality of life and appearance of that neighborhood. He is also a member of the Rotary Club.